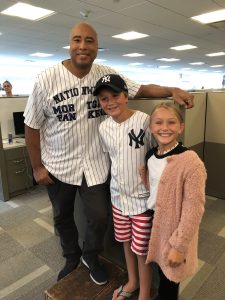 Bernie Williams is a former professional baseball player and prominent Puerto Rican figure. All 16 of the years that make up his MLB career were with the New York Yankees. During this time, Williams and the Yankees won four World Series championships and Williams himself walked away with five All-Star awards. At the end of his career, Williams had a .297 batting average and 287 total home runs. In 2015, the team honored Williams with a plaque in Monument Park and retired his uniform number, 51. Williams is considered to be one of the best switch-hitting center fielders the Yankees has ever had.

Since its launch in early 2019, Americasa has worked to enable and empower Latino individuals to become homeowners. By educating communities on the mortgage lending process, more Latinos have the knowledge needed to become educated home buyers and owners.

Williams will be making an appearance at the Cuba Libre VIP Meet & Greet with NMB and Americasa on Dec. 11. This event, which follows a day at Triple Play 2019 in Atlantic City, is meant to provide a networking opportunity for individuals to communicate with realtors and loan officers.

“I am thrilled to be a part of the Nationwide Mortgage Bankers and Americasa family. I strongly support their initiative to empower the Latino community to buy homes in America,” Williams said when prompted about his new role. “I know that education is key when buying a home and support the work NMB and Americasa are doing in the field. I look forward to our continued work together.”

In addition to its success in kickstarting its Americasa platform, NMB continues to be the fastest-growing independent mortgage lender in America. Its new website, NMBNow.com, aims at giving consumers a digital mortgage experience that is accessible and easy to use.